Good thing I have a lot of jars in my house, because I keep find great uses for them!  This "No Complaint Jar" caught my eye because the normal chore charts don't work for our family.  They just don't.  We have been having HUGE problems lately with both of the kids not listening.  I think it's a combination of my son going through the "NO" phase because he's two and my daughter copying him - because if he can say it, so can she!  However, there's a difference between my two year old and my four year old saying "NO" every time I ask something.  If it's not "NO", it's ignoring or whining or crying.  Which leads mommy to get frustrated because everyone is saying "NO" or crying or hitting and then there are meltdowns from EVERYONE (including mommy) and it's not a good place to be!  No one is happy afterwards and it sucks.
So we made up our own jar.  It's called the "Nickle Jar".  Every Sunday we put 5 nickles into the piggy bank (the jar is the bank).  When she says "OK" or listens on the FIRST attempt, she gets a nickle.  When she whines, cries, screams or says "NO" on the FIRST attempt, she loses a nickle.  Pretty simple.  If mommy loses it (hey, everyone has to be held accountable), then she can point it out and she gets a nickle.  It has been working really good.  I'm not saying that she listens 100% now, because no child does.  But it's a reminder to keep our cool, sit down, talk about WHY we're not listening and how we are going to make it  better.
We emptied mommy's piggy bank and found all of the nickles (a great sorting activity).  Then we sent daddy to the bank to get some extra nickles to top up the bank.  Once we had all of the nickles separated, we were ready to start!
And Sunday is the day that she gets her nickles out of the piggy bank.  We have decided that because she is four, she needs some instant gratification somewhere, so half of the nickles will go in her piggy bank and the other half will be taken directly to 7-11 to buy some candies. 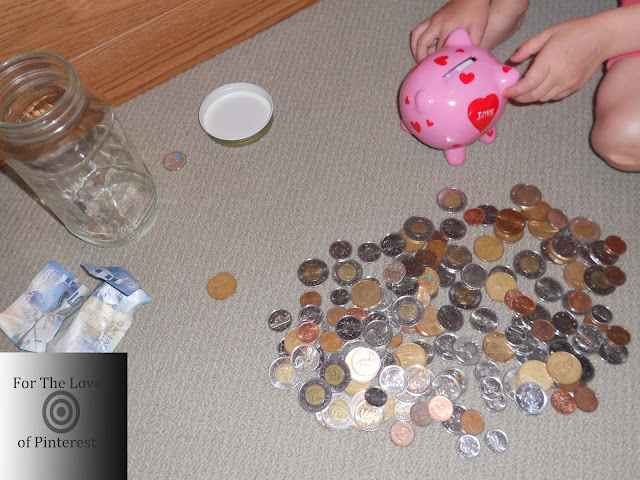 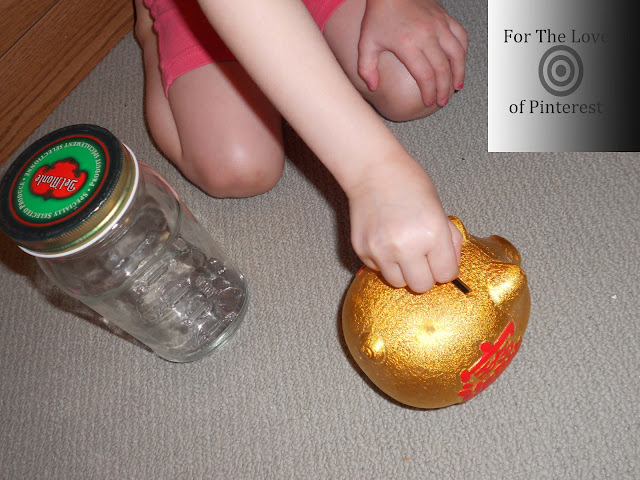