The goal for todays activity was to create and imitate sound using an instrument.  I've actually never done this before, but I saw the idea on Pinterest and pinned it as a reminder to attempt it one day.  My daughter told me that morning that she liked xylophones because they made pretty music.  We talked about making one and I got down the cups.  She got really excited and told me that Max and Ruby had made a xylophone like this before and she couldn't "WAIT to try it!"
I did not have 6 tall cups, so we had to use short ones.  It worked, but if you have 6 tall cups, I would suggest using them because they would probably make better sounds.  I filled the cups with water and we sat down on the floor.
Next we added the colours and this was where my son got to help out.  He named each of the colours as I made the cups.  Then to make purple, I asked my daughter how to make purple.  "Um, with blue and green?"  I told her she was close.  "Oh, I forgot.  Blue and RED!"  I did not have yellow food colouring, so we couldn't make a rainbow.  I still have to put that on the shopping list . . .
We used the drum stick from the instruments downstairs and they made wonderful sounds.  My daughter asked me to play Twinkle Twinkle, ABC's, Mary Had a Little Lamb and Itsy Bitsy Spider and then SHE tried to imitate the tunes.  My son learned the he could put the drumstick BETWEEN two glasses and move it back and forth really fast to make a neat noise.
What a fun activity! 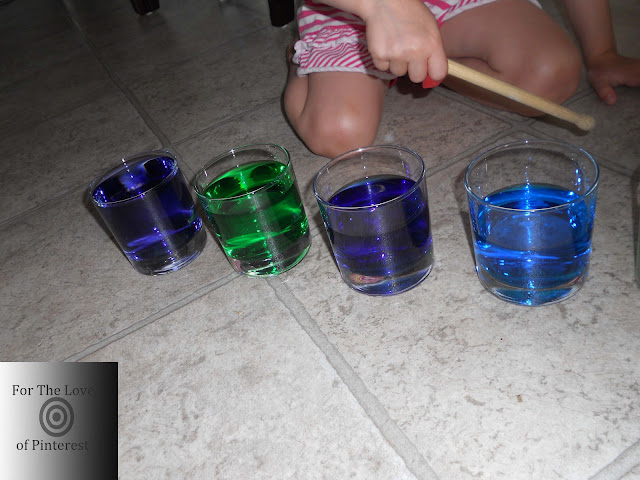 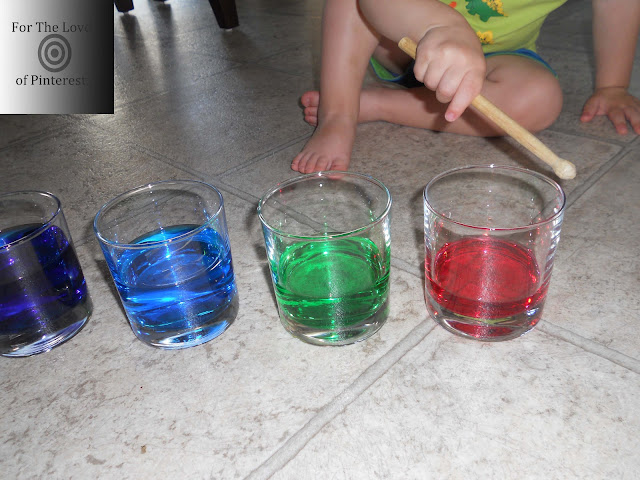